When we came back to the marina, we were happy to see our boat.  We both missed Adventure very much.  Had the bottom cleaned by the local divers, and found out there was a LOT of hard growth on the bottom, where she tends to settle in at low tide.

We cleaned up the boat and emptied all the extra crap because we had to make room for two crew members who had planned to go with us towards the Bahamas for a couple of weeks.  In the end, that didn’t work out, as they had other things happening in their lives which precluded them from going along.  But, the four of us took Adventure out and put up the sails the second we left the marina and put her through a pretty good shake down cruise for the day.

Unfortunately, we hit the mud, which slowed us, and the wind blew me into the neighbors boat.  Small scratch, but’s it’s going to cost a bit to fix.

Adventure performed extremely well, and we wound up doing a bit of a “show boat” past the marina under nearly full sail (minus mizzen), and got a video and pictures.  I’ll try to post those. 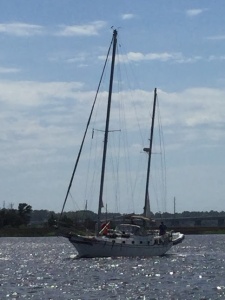 On Monday the 6th of May we’d planned to leave.  We both woke up to zero winds and looking at the various weather apps decided not to go.  Some of our friends argued with us about it, but we’ve had enough of making a decision, being talked out of it and/or second guessing ourselves.  We stood our ground.

On Tuesday though, we knew it was light in the morning and would pick up, so we were going to head out.  About 45 minutes prior to departure, I had all lines off but two to make it easy on the deck crew (our friends) and started smelling something “wrong”.

Going below, the transmission was shooting transmission fluid out the side.  I thought the seal had gone bad.  I spent several days trouble shooting and cleaning the pans out below the engine.

Finally, on Friday, I verified 100% the problem.  The shifter lever was the culprit.  Inside is an O ring that was probably worn.  Yesterday, Saturday 11 May, I tore into the thing.  It was easier than I expected, but it took me quite a few hours of research and downloading the manuals and trying to find any sort of instructions on disassembly.  I was unsuccessful at finding any videos.

The hardest part was keeping hold of a tiny ball bearing and screw that threatened to shoot out of the housing and down into the bilge.  I put a powerful magnet there to catch things, which saved me having to hunt for the ball bearing when it actually shot out and stuck to the magnet!

I pulled the guts out and looked and sure enough, the O ring was worn badly, and cracked.  When I tried to remove it, it broke in two.  I took the stuff to Napa who had the right parts.  $1.47 later, I had a new O ring and one spare.  I expect I should never have to do that again, but at least an O ring doesn’t weight much.

After reassembly, everything seems to be running well, no more leaks.  I’ll check the levels today and probably have to add a little bit to the transmission.  As they say, it’s best to run between the lines and have less than more.

With a bit of luck and weather planning we can still get out of here for a couple of weeks for some kind of adventure.

Sometime in June, JoAnne needs to go in to see a doctor, get a chemo port flush.  So, we’ll also have blood work done as well and pass that data on to her oncologist back in Colorado.

Today is Mother’s Day.  I took JoAnne breakfast and coffee in bed.  Of course, I do that almost every day anyway, but I got to tell her Happy Mother’s Day that way.

Today, there are storms coming through in a few moments.  Look like they will last an hour or so at most, and blow off.  More stuff is coming from behind, but will be hours and hours before it’s arrival.

The waves and winds do not look too good for tomorrow to go outside.  We’ll keep our eyes open for a weather window though.