Dad passed away on the 15th of September.  He was born on 6 Feb 1936.  We were called last May to come visit because he was ill and in the hospital.  JoAnne and I drove to Michigan on an emergency basis, taking emergency leave from both our jobs to get there.  We visited with him over a few days and he was improving slightly.  My brothers and sister all showed up along with many other family members to pay their respects and well wishes to him.

On my last day before we had to head back to Colorado I had a 15 or 20 minute private conversation with him, just him and me.  It was his wish that he be left to his own body… in other words, he knew he was ill and wasn’t going to live much longer.  He told me a few things; told me he was proud of me for my own life’s work (such as it is) and told me that retiring early was the BEST thing in the world and he should have done it as well.

He cared very deeply for his family and knew they cared for him, especially his wife, Gail.  He wanted me to make sure before I left that Sherry and myself worked with her to ensure she was going to be “all right” when his time came.  That was around the end of May this year, 2012.

I told Dad he was my childhood hero and I wished that he could have been Superman in disguise and live forever.  He laughed and said, “No one lives forever.  None of us.  We can only live as long as God lets us stay here” and wished me a long and healthy life myself. Told me to get back to Colorado and make sure I completed my plans to head out cruising.  Said it would probably add 10 or 20 years to a person’s life.

He wanted his kids to be happy, healthy and grow up to be intelligent and wise.  He said that for the most part we’d accomplished what he hoped for us.

When I discussed coming back for his funeral, he laughed and said, “I’m probably going to be cremated – you remember me how I was, not how I am now.  I hate being weak and unable to get up and move around on my own any more.  This kind of life is NOT for me any more.  Don’t waste money trying to get back up here and just remember me.”

When Bobbi Jo called (my Sister-in-Law, who was chosen to do the notifications) on Saturday morning Dad had passed about 10 minutes before her call. We were on our “Second Honeymoon” in South Padre Island, scheduled to depart on Monday.   I wasn’t shocked, I expected it. But I was saddened because my father was there for me as a child as he should have been.  He never came to Colorado to visit us, or to DC, or Virginia or even Oklahoma I suppose because that’s the way he was.  He didn’t like trying too many new things and didn’t really like traveling all that much.

That’s ok, I got back to see him as often as money and time would permit.  Most of the family was there when he passed, though I don’t think they were by his side.  I understand only Gail was with him which is as it should have been.  I’m glad we made it back to Michigan last May to visit with him and sorry we couldn’t get there in time for the Memorial service, but I understand it was good for family to get together to remember him.

Death is as much a part of life as children being born to a family.  I’m confident now that me, my brothers and sisters have accomplished the most important thing, passing on our name, something that some families can’t do as the last of them die off.

Since my wife and I have raised five children and they’ve given us around thirteen grand children now, we have accomplished the most important thing to the family, passing on that name.  It’s time for us to move on to the next and probably final stage of our own lives before death comes knocking at our doors.

I expect my Dad is in Heaven now, guarding the Pearly Gates for St. Peter, in his Marine’s Uniform.  I hope my family can remember him, not as he was sick and weak in the hospital.  The only thing left now is our pictures, and our memories and even they are fleeting things.

My Father, Troy Donaldson passed from this world today. He was 76 years old. He lost two wives, my mother and his second wife Betty. He was married to Gail when he passed. He raised five children, one of those he survived, my dear sister Robin. Dad worked in a factory, as a trucker, wine delivery man, and drove a bus back in the mountains of Kentucky for doctors and nurses giving shots and examining the needy.

Dad’s most important job was as a United States Marine. But he went AWOL for a couple of days to marry my mother Jean. When he came back in he was slated to reenlist and stay in another few years. But they had to punish him for going AWOL. But, he chose to get married on the Marine Corps birthday, so they decided to let him finish out his term and get out. Busted him to the “Permanent Rank of PFC” (from Corporal and he was to be promoted to Sergent when he reenlisted).

Dad sometimes didn’t make great decisions, but at least marrying Mom was a good one… The number of grandkids proves that.

I know Gail is going through a lot right now, but our family loves her too. She’s not my mother, but she was dad’s third wife and Dad cared very much for her. I want her to know how much we will all miss him, right along with her and we support her and she can call on any of us if she needs us.

He never said “Come here, let me show you this or that”. He just did things and made sure I was paying attention. If he yelled at me I deserved it. If I got a spanking as a child, I certainly had done something to probably have my ass kicked for. I learned either not to get caught being stupid, or more likely NOT to do something stupid.

Dad taught me how to fight. Mom didn’t want him to teach me that stuff. Dad said “I don’t want a son that can’t throw a punch, or not be able to defend himself.”

Dad had a black belt in karate but stopped practicing when I was a little kid. Dad was a SCUBA diver when I was a child. He lifted weights. He did a lot of other things I suppose my brothers and sisters won’t remember, being pretty young.

In short, my Dad was my main childhood hero. Oh I liked Superman, Neil Armstrong and the typical kid heroes, but Dad was my hero and he still is.

Without Dad my life would have been… mundane, and I’d likely have ended up like so many other kids out on the street, hanging with gangs or whatever.

But because of my Father I’ve been blessed with fantastic sisters and brothers, I married my awesome wife, raised five children with her and now we’re blessed again with — so many grand children, thirteen now.

My friends – life is short. Dad was 76. I knew him for 55 years. My time on this world, if genetics holds up will only be another twenty or so years. With luck…. maybe 30. Who knows? Only God knows.

All of you, call your mom, your dad and your close relatives and wish them well, tell them you love them. Tell them you miss them when you do and go see them when you can. And for the love of God, enjoy life while you can.

Good bye dad. I love you. 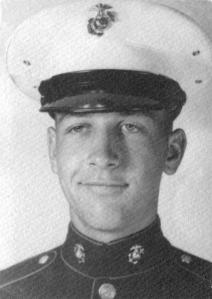