On Thursday evening last week we received several calls about the Jeep.  The first person to show up with the money got it.

We got the full asking price we wanted from a very nice man who was an Air Force Retiree like myself.  He loved the Jeep and came in early Friday morning with the cash in hand (Friday the banks had already closed when he looked it over).

JoAnne and I had finished our packing and hooked up the trailer, and were ready to leave when he arrived.  All that remained was to give him the title, collect the cash, load our cooler and grab ice and snacks for the road – which we did.

We were finally on the road at 11:15, on 17 July.  We stopped in Salina Kansas at a Day’s Inn when we got tired.  We’d stayed in that Day’s Inn many times on the way to our normal destination (Mike and Cindy’s home in Richmond) but this was the last time we will stay there.  The clerk was rude, the place was a mess, the rooms smelled bad and the lights didn’t work in the room (most were out).  We complained but no one would listen either that night or the next morning.  They simply made excuses.  So… never again.

We arrive at Mike’s house on Saturday afternoon around 1pm.  We’ll stay here until Friday morning, when we will head out and drive to Cincinnati Ohio to visit Ryan from the Transasian Axis web site.  Ryan and I have never met, but have been friends for many years from the days when I helped run the Anomalies Network.  Ryan is the owner of http://www.transasianaxis.com site.  Yesterday he was grilling and a tornado passed right by him.  He posted a Youtube video of it.

After we depart Cincinnati we’ll head for Columbus Ohio to visit Bob (Another friend, like Mike, from our White House days in the 1980s).  Finally, we’ll stop in Virginia to visit Phil.  Another friend from the Anomalies and TAA web sites.  He’s agreed to hold on to some equipment we’ll be delivering until I can bring the ship down to Chesapeake Bay a few weeks later.

Tomorrow we drive back through Kansas City to the west side and down on 435 to visit a friend who owns a paddle wheel boat we’ll tour.  If I can, I’ll get pictures of the boat and post them here.

That’s all for now.  I’ll update in a few days.

Oh yeah, this little guy was waiting for me in the yard this morning to get his picture taken when I walked outside to go get gas in the truck.  If anyone is missing their pet bunny….. Probably not. LOL 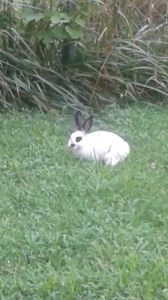