Two weeks ago my brother, Steve, who happens to be my baby brother and is significantly younger than me, went into the hospital.  He is suffering from kidney failure and congestive heart failure.  I won’t detail any thing else here due to his privacy.  But he has been on a ventilator for most of that two weeks.

I just got word that Steve will be taken off the ventilator today, which is a VERY good sign.  He’s awake, aware, and has even stood up and taken a few steps.  We can only hope he gets better in the next few days and can get his medical issues corrected.

We left last Tuesday morning by rental car to collect our own car sitting at Kurt’s place in the Northern Neck of Virginia.  The car issue was in and of itself an “adventure”.

Enterprise Car Rental loaned us a car for a one way trip.  I’d had the vehicle over the weekend and we did the required “walkaround” and there was some damage to the left front fender where it appeared something had gone up inside the wheel well, bounced around and then probably went out.  I pointed it out, and the guy there (Ben) said they had it on the paperwork and were aware.  There was also a window ding, where a rock had hit the window.  That too, was known.

When I tried to turn the car in on Tuesday, they told me to “keep it for my trip” and they would adjust the paperwork and not charge me the extra few hours.  All good so far.  We departed more or less on time and headed for Tappahannock, VA where we would eventually try to turn in the car.

It was a five hour trip.  Now, mind you, we are very careful with our cars (whether ours, or someone else’s cars) and there were no accidents, no bumps, no crashes, no demolition derbies or anything in our trip.  The trip was completely without incident except stopping to put gas in the tank.

I called the rental place in Tappahannock to tell them we’d be arriving around 4pm and would require a ride to our car along with all our stuff. They told me they couldn’t give me a ride after 4:15 PM.  So, I said I’d call if we couldn’t make it until after 4pm.  Henry said he would have someone take us around 4 anyway.  Cool

In fact, we made it at 3PM.  When we arrived, I explained that JoAnne couldn’t drive the car all the way back, so we wanted to drop off then and get a ride to the house where our car was located, and we didn’t know if it had enough gas, would start or we could get the keys.  There was some issues with calling the drivers and they pretty much refused to get back before 5pm and told him they weren’t staying to do the drive.

Of course, Henry didn’t know I could hear these people giving him crap on the phone.  A good manager doesn’t let on there are issues, and Henry was polite and told us we could simply call tomorrow and leave the keys with the car and they’d pick it up.  I told him I would TRY to return it myself that evening, but would call at 0800 if we could not.

Next morning I left the keys in the car under a floor mat and tried calling.  They didn’t open until 0800, and no voice mail.  So, JoAnne and I got on the road and were two hours away when we finally reached Henry.

I gave him the address, told him where the keys were located and that the car was in the drive way at the house and should not be an issue for him.  My car sat there for three months with no problems.  Henry assured me he would call when they recovered the vehicle.  Still, no problems.

At 1830 on Wednesday evening, in the middle of rush hour traffic in downtown Detroit, he calls me to tell me they recovered the car and “there’s a problem”.  Starts telling me about a “rocker panel”.  I wasn’t even sure what a rocker panel was.  Said there was “damage”.  After an explanation of what it was I said there was indeed damage to the car on that side (driver’s side) under the wheel well and on the fender from something that had happened and it was clear that any damage on that side likely had to do with that previous accident – and Enterprise WAS aware of the damage.

He insisted that it “must have happened while you had the car”.  Ummm… no.  I contacted the other office and had them talk.  Next day (Thursday) I get a  call from the manager in Southport asking questions.

After I explained it all to her, she said she would take care of the issue.  Today I plan to drive up to the office and see them face-to-face and see whether this has been resolved or not.  They promised me pictures, which I haven’t see yet.

So, here we are in Southport with a ship and a car.  I need to figure out what to do with the car, and plan our escape from here.

JoAnne and I discussed making Southport our “home port” though, last night.  Not necessarily this particular marina, but this area to be able to sail in and out of Cape Fear and down the ICW.  Why would we do that?

When we arrived last night no one was around. The place was quiet, and we unloaded our car and moved our stuff aboard.  Then we decided to head over to Check Six (a local brewery) that we’ve been visiting.

When we walked in…. wow.  The people here are wonderful.  They all knew about my brother, and they asked about Steve.  There were hugs all around, the owners came over to hug us, patrons and people we barely knew treated us like family.

Southport has been wonderful.  All of the people are nice, helpful and it’s not very stressful here.  It “feels” like home.  Though, for us, Home is where ever we drop anchor or can stay a few days normally.

No matter what we decided to do, we have to decide by 6 Feb 2017 as that’s when our paid time on the docks is up and we either need to move on or pay (and it’s not cheap here in this marina either).

Now we’re faced with finding a place to store the car (or sell it, which we’re both opposed to doing at this point) and move down the road to Florida, or we have to go south to Florida and find a place to get a mooring ball or slip (and pay for that) and leave our car THERE.

No matter WHAT we decide though, we will be coming back to Southport to visit.

Today I check on prices for marinas here, Florida and have a chat with Enterprise.  I’ve rented from them almost exclusively for years and if they attempt to charge me for damages to a car that I didn’t do and were already on the vehicle, I will never rent from them again and I’ll be spreading the story far and wide. (There’s more to this story than I’ve told, about how they give out damaged cars, and what they do if one comes in damaged… more on that later IF necessary).

On a boat note here, batteries seemed ok with sitting here running only the bilge pump and charging on solar.  Then again, we don’t have any leaks that could cause the bilge pump to go come on often (if ever).  So, she sat here at the dock a full eight days without any maintenance, checking or supervision. 🙂

Thanks to the Dockmaster at South Harbour Village Marina, Bill and crew for looking out for us, and a special thanks to Jay Beard, another full time cruiser friend for “keeping an eye on her” for us.  I appreciate all of you.

Finally, IF you’re ever passing through Southport and you happen to like craft beer, I strongly suggest you do NOT miss the Check Six Brewing Company over on Southport Supply Road  (http://www.checksixbeer.com/).  Good friends, good beer, good company!!!!  (And to be sure, I RARELY give such endorsements!) 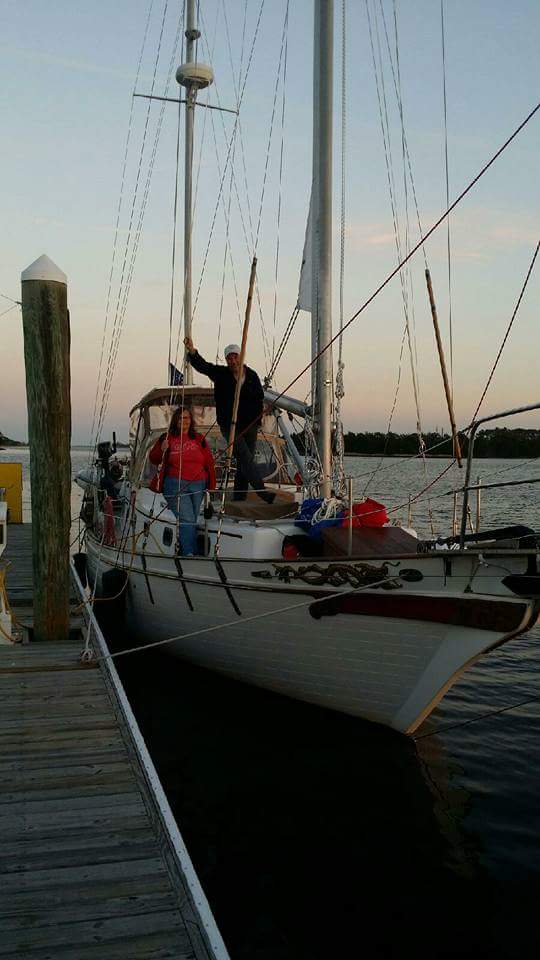